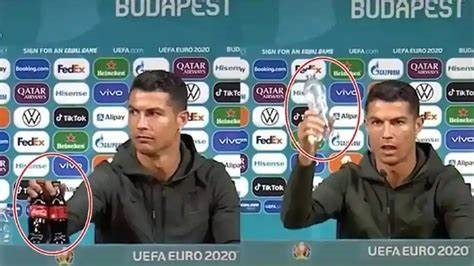 In the viral video which is currently trending online, Ronaldo who sat beside Portugal manager Fernando Santos ahead of his team’s match against Hungary irritably set aside two bottles of the soda drink placed before him.

Cristiano Ronaldo went on to pick up a bottle of water and suggested people should drink water by saying “Água!” – which is Portuguese for water.

According to the Business Insider statistics, there was a sharp drop in Coca-Cola’s stock price after Cristiano Ronaldo snubbed the beverage. Coca-Cola’s shares which were initially trading around $56.17 when the market opened on Monday, reportedly fell 1.6% to $55.22 by the end of the press conference. That resulted in a sharp drop in market value from $242 billion to $238 billion. The soft-drink manufacturer’s shares closed at $55.41 per share on Tuesday.

Coca-Cola, which is one of the official sponsors of the UEFA EURO 2020 tournament has since issued a statement about the incident, saying;

“Everyone is entitled to their drink preferences” and have differing “tastes and needs.”

Prior to the viral incident, Ronaldo has always previously spoken out about his disapproval of Coca-Cola and other unhealthy beverages and food.

Ronaldo is a fitness fanatic, he follows a fitness routine that includes eating six meals and taking five naps on a typical day.

I’m big fan of Cristiano Ronaldo , but what he did during that interview was so uncalled for, He must apologize. Obviously He’s one of the most famous Sportsmen, people admire him so much to an extent they imitate his actions.

Sometimes it’s about personal endorsements, they were playing him by putting it there.

Talk about real influencers, a man shifts 2 bottles of coke one the other side the poooo 4 billion ko Coca Cola.. Yhoo,

Let’s just check the fact go to his house to find out if he doesn’t drink that brand,secondly he forget that the Euro he’s playing in to showcase his talent is totally sponsored by the same brand he’s kicking out

Ronaldo went from Spain to Italy then DSTV dropped Bundesliga for Serie A dude is undeniably a boss and I’m a Messi fan pic.twitter.com/5r10wQbMbV

They are not paying him, so coca cola was pushing a marketing strategy and he knows that. CR7 is a brand.

Watch the video below

Articles you may want to read:

We can create a website and chatbot for your business! Be found by clients online. Click the link for more details: flipknoxsystems.com