In a follow up to a Government directive banning all mobile money transfers, EcoCash has told customers to ignore the ban and continue using the transfer.

In what promises to be a clash of giants,  EcoCash also urged its customers to remain calm.

In a statement released on their social media pages, EcoCash said would expect such a directive from the Reserve Bank of Zimbabwe (RBZ) and not Government.

IHarare is publishing the full statement below:

We are aware of a statement purporting to have been issued by the Secretary for Information, Publicity and Broadcasting Services that purports to ban all mobile money transactions.

We urge all Ecocash users who exceed 10 million Zimbabweans, the majority of whom do not have bank accounts, to remain calm and to continue to do your lawful transactions as usual. Should there be any changes, we shall give you adequate notice as required by law. 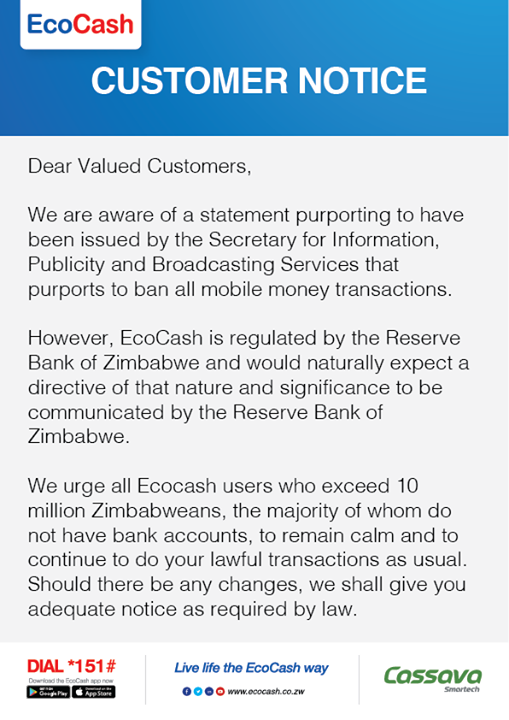 The response by EcoCash follows a Government ban on all mobile money transfers on Friday evening, The directive was announced by Secretary for Information, Publicity and Broadcasting Services Nick Mangwana.

In the statement, Government accused mobile money platforms of fifteen (15) activities which include;  illegal externalization of foreign currency through transfer mispricing; acting as banks outside the purpose for which they were originally licensed, as non-banking financial institutions. This includes, in the particular case of Ecocash, holding well in excess of ZWL$8 billion distributed across just over 501 000 agent/merchant lines as lat 10 June 2020, which is not under the scrutiny of the Financial Intelligence Unit; fraudulently creating and issuing non-attributable and non-auditable agent cellphone lines/accounts and facilitating illicit trade in notes and coins, at contrived rates of between 30% and 50%, thus causing artificial shortages of the same within the banking system.