RBZ Responds To Reports That It Is Printing Money Again

The Reserve Bank of Zimbabwe has dismissed reports that it is once again printing money which has resulted in the collapse of the local currency which was reintroduced last year.

This follows an article which was published by reputable business and economic news newspaper, The Financial Times, which alleged that the Reserve Bank was responsible for the collapse of the local currency. The Financial Times alleged that the monetary authorities were printing money to subsidize gold miners to encourage them to sell their gold via the formal market.

The Monetary authorities have issued a strongly worded statement dismissing the allegations and labelling them malicious and misleading.

iHarare publishes the statement from the Reserve Bank in full below:

The Financial Times edition of 28 February 2020 carried an article headlined. “Zimbabwe secret money printing threatens IMF assistance’, with the subtitle “Scheme to subsidise gold miners contributed to collapse of local dollar, The article stated that unnamed sources had said that the alleged “money —printing scheme was designed to incentivise gold exports but hastened a decline in the local currency,

The Reserve Bank of Zimbabwe (the “Bank”) wishes to advise members of the public that the article is malicious and mis.ding and the Bank dismisses the article with the contempt it deserves. The article is calculated to tarnish the image of the Bank, and ultimately that of the country and its leadership, through misinforming the public. The Banknotes, with concern, that the article seeks to fabricate an International Monetary Fund (IMF) Executive Board’s Report on the Article IV Consultation for Zimbabwe which development is quite unfortunate and disrespectful of the IMF as an institution and the Republic of Zimbabwe as a member of the IMF.

As stated in its Monetary Policy Statement of 17 February 2020, the Bank reiterates that the growth in money supply, or more specifically reserve money in 2019, was as a result of subsidies on fuel, electricity and grain and Government expenditure. The contribution of the gold sector incentive scheme was very minimal to the growth of reserve money. It is also mischievous to allude to “secret money printing”. there is no secrecy in the of the old incentive scheme by the State, through the Bank.

In order to ensure the continual flow of gold through the formal channels and thus mitigating the leakages and side-marketing of gold, Government, through the Bank provides incentives to the gold sector to increase foreign exchange through the interbank foreign exchange system. The gold incentive scheme, which is funded through the Budget, has not been discontinued, as alleged, in the Article. The decline of the value of the local currency was largely due to various factors including low business and consumer confidence, low production levels within the economy and the impact of macroeconomic shocks such as the drought and Cyclone Idai.

The Bank remains committed to the implementation of the Monetary Targeting Framework under its tight monetary .ance and is targeting reserve money growth of 1°- 15% by the end of 2020. As a result of the tight monetary policy stance and .ability in the exchange rate, the month-on-month inflation for January 2020 declined to 2.230/0 from 16.56. in December 2019, and the forecast is that it will remain in the single-digit levels for the rest of the year. 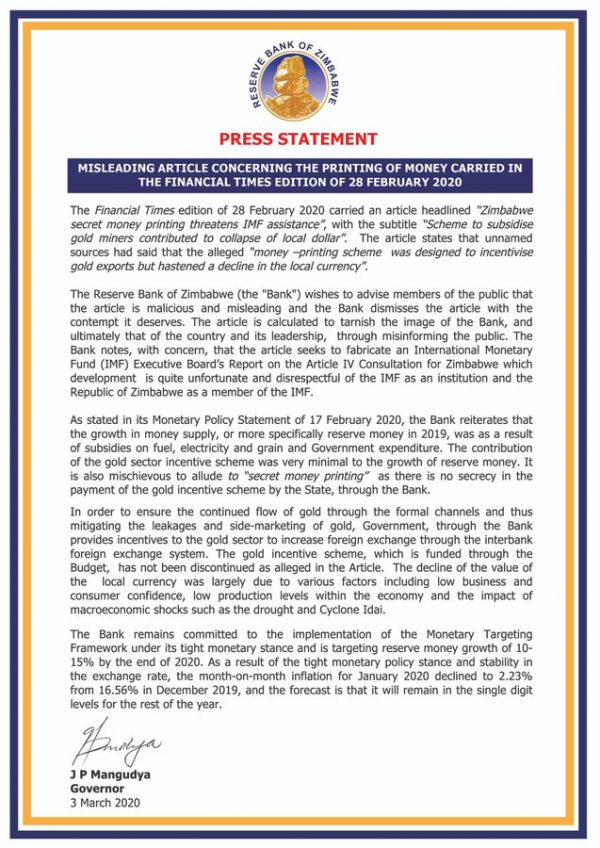 The frenetic attempts by the RBZ to deny its insatiable money printing zeal is as tragic as it is unacceptable. In its own February Monetary Policy Statement, it accepts broad money rose by 300% It is spending billions on quasi-fiscal activities including fuel & gold subsidies.

Truth is the RBZ is a rogue institute that is at the epicentre of the instability of the exchange and monetary policy framework of the country. It is the largest actor on the parallel FX activities, drives fuel & gold cartels & is responsible for opaque non-concessional loans.

With the tobacco floors opening soon, the rogue Bank will rob farmers of their FX earnings without any strong legal basis for the expropriation That FX will then be used to oil cartels such as Trafigura, FSG, Command Agriculture& many other illicit activities. RBZ should be shut

The post Furious RBZ Responds To Reports That It Is Printing Money Secretly Again appeared first on iHarare News.