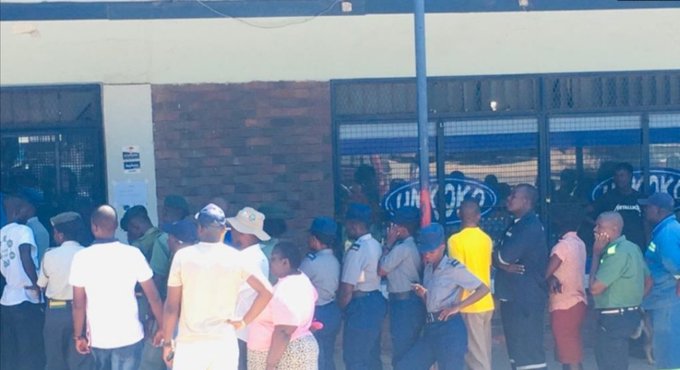 Police Officers Banned From Buying Mealie Meal While In Uniform

Members of the Zimbabwe Republic Police (ZRP) have been banned from buying mealie meal while clad in their police uniforms. This follows numerous complaints that the police officers are abusing their uniforms to gain an unfair advantage and jump the queues for basic commodities such as subsidized mealie meal. Police officers have subsequently been accused of hoarding basic commodities which they would have managed to purchase using their uniforms.

As a result of this, the police officers have been banned from buying mealie meal while clad in uniform. Below is a letter from the Bulawayo Provincial Police Headquarters advising of the new regulations:

TO:  ALL STATIONS CLASS ‘A’ BULAWAYO

SUBJECT: PROHIBITION OF PURCHASE OF MEALIE-MEAL BY POLICE OFFICERS IN UNIFORM STOP

ADDRESSEES ARE DIRECTED TO TREAT THIS SIGNAL WITHOUT DISDAINCY STOP

Below is the actual document.

IMPORTANT NOTICE: Dear invaluable iHarare Reader. It is our sheer delight to introduce our intelligent Whatsapp service which allows you to access the latest News, Jobs and Exchange rates on WhatsApp. Send a WhatsApp message with the word HIE to +263718636522 or just CLICK HERE to try it out. iHarare has morphed into an integrated information one-stop-shop. Please click on the links highlighted in Red to access News, Events, Jobs, Pricecheck, Classifieds, Dating and Education services by iHarare.For any queries contact us by CLICKING HERE .