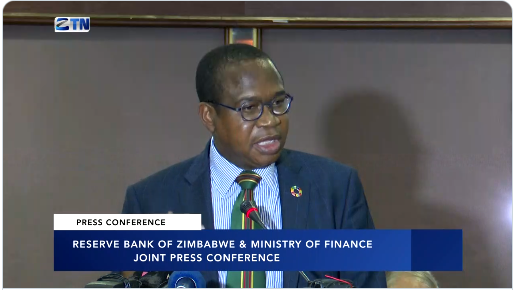 Mthuli And Mangudya’s Presser As Forex Rates Shoot Up

Minister Of Finance and Economic Development Professor Mthuli Ncube and Reserve Bank of Zimbabwe (RBZ) governor John Panonetsa Mangudya held a press briefing where they announced the measures that they are going to take to stabilise the local Zimbabwe Dollar. The press briefing came after a turbulent week for the Zimbabwe Dollar, which show saw the local currency depreciating sharply against all major currencies.

During the press briefing, Finance Minister Mthuli Ncube announced that Zimbabwe is going to adopt liberalize the rules for trading for Bureaux de Changes and introduce a “managed floating exchange rate system”. The Minister said,

“Zimbabwe has had no transparent and effective forex trading system for a long time; official rates haven’t been effectively determined while a thriving parallel market has developed

“To correct this (forex) anomaly, a Reuters trading platform is being implemented immediately. This platform will allow forex to be traded freely amongst banks and permit a true market exchange rate.”

Ncube also announced that the government was going to form yet another taskforce. This time the government is introducing a “Currency Stabilisation Taskforce” in a bid to tame currency turmoil. The Taskforce will meet once a week to review the conditions in the markets, monitor the behaviour of key variables such as the exchange rate and inflation.  Said the Minister,

“In order to stabilise the exchange rate and hence, to lower inflation, the Government has decided to implement a holistic package of key policy measures. In this regard, a Currency Stabilisation Task Force has been set up. This will be spear-headed by the Ministry of Finance and Economic Development and the Reserve Bank of Zimbabwe, and will include members of the MPC and PAC.”

While mobile money platforms have made a significant contribution to facilitating trade and payments in the country, they have also become an instrument which is being used by unscrupulous businesses to illegally trade foreign exchange and undermine the economy. The RBZ is, therefore, currently reviewing all the regulations covering such platforms

You can download the full press statement in PDF format on the link below: